Kajsa Balto is a Sámi artist born and raised in Oslo, and one of the Norwegian artists taking part in Global Music Match, the largest online matchmaking of musicians ever undertaken.

“Tell us about yourself, who are you and how did you begin as an artist?”

My name is Kajsa Balto, and I am a Sámi artist born and raised in Oslo. Even though I grew up outside of the traditional Sámi region, I was able to visit Sápmi quite often and keep in touch with my family there. My father always spoke Sámi to me at home, and used yoik, the Sámi traditional form of song, as part of our daily life. I have been doing music for as long as I can remember, and I have played in a few bands, but mostly as a pianist and not as a front vocalist. But, becoming a mother just made many of my insecurities disappear, and I stopped double think about everything. You just got to get things done, you know. And also, I suddenly had this urge to pass Sámi traditions on to my own kids. And yoik is one way to do it. So it just came naturally in a way, and I hope my recordings can keep the awareness alive in my family also after my time.

“Can you tell us a bit about your music, how would you describe it?”

I am lucky to be working with a really great band, consisting of cello, guitar and drums. We mix different styles and elements, so I would describe as a powerful crossover between pop, world and folk music, rooted in the Sámi yoik tradition.

“What inspires you when creating music?”

For my album “Buot eallá” I found inspiration in my own family, just talking to my aunt, or listening to my father yoiking and telling old stories. The result was an album consisting of yoiks collected from within my own family, and songs written based on traditions from Sápmi.

“You are selected as one of the participants of Global Music Match, tell us a bit about the program?”

Yes, I am one of six Norwegian artists participating in this project, selected by Music Norway. In total there are 96 artists from 14 different countries. All of us are being teamed up in groups of six, or seven including our coach. And within the next weeks, we will share each other´s conversations and music through social media. I have been told it is the largest online matchmaking of musicians ever undertaken.

“What do you hope to achieve during the 6 weeks of the program?”

I became part of this project not excactly sure what to expect. Increase my network maybe, learn new stuff about the different international markets, or perhaps gain listeners or followers. We´ll have to wait and see what comes out of this project in the end, but right now I find being part of this little group of 6 artists very valuable. I get to connect with well established musicians from other countries, learn about the different markets from their perspective, listen to their experiences, find out what motives them and how they have kept going. And I get to discover new music that I probably would never have discovered otherwise, which is very inspiring.

“Global Music Match has a focus on export, what are your ambitions as an artist internationally?”

Up until now I think we have only done two concerts outside of Norway. But these two concerts were maybe our best experiences so far. The response was just overwhelming, I didn’t really know that there was such an interest for yoik out there, it was just very rewarding in many ways. So I guess I have to work on getting more shows like these happening. It would be great if the knowledge and network I get through Global Music Match could help me out in this process. It can be difficult knowing where to start, so I am really grateful that I get to be part of this project.

“What is the best advice you have ever received?”

My mum once told me that what you do not nurture will eventually die. This probably makes more sense in Norwegian, not translated to English like this, but the point is not to give attention to the things you know are not good for you. This turned out to be a great advice when it comes to many aspects of life. You can think of friendships, other relations, projects or goals like a small seed or sprout. And you will probably know what you should do if you want to see them grow and thrive. 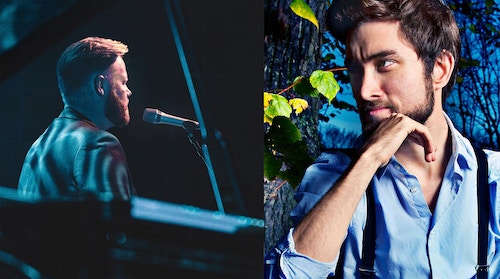