Manager Eivind Brydøy on the export plans after the reopening

Eivind Brydøy works as a manager in Artist Vision and tells how he has planned the upcoming time now that Norway has reopened.

Brydøy says that they were well under way with the export of the artists Fay Wildhagen, Thomas Dybdahl and Thea & The Wild, when the pandemic hit. They all had to cancel concerts and showcases, and they had to spend their time on something other than exporting and live. Their main focus now, after reopening, has therefore been to get started again with export.

- I see that some of the ticket sales have been a bit slow in October, but I think that will change over the winter. There have especially been cultural events that have been subjected to severe closure, while shopping centers have largely been allowed to stay open. This has probably affected people's perception and it takes some time to turn this around. For international tours, there is little space at venues in the spring as many tours have been moved. We have two tours in March / April that have already been set in Europe, but it is not a good time to start with new artists going live. I do not think it will normalize until 2023. Festivals have also moved artists to 2022, so there is not much room for new ones there either.

- And even though Norway has opened up, we still have several countries in Europe that are lagging behind in vaccination, so it takes a little longer before they are at the same level as us, he adds.

Furthermore, Brydøy says that he wants his artists to get off to a good start after the pandemic.

- We want our artists to get off to a good start after the pandemic. We have several major concerts that have been moved forward in time here in Norway which will happen this fall. In addition, we obviously have a lot to catch up on the export front. We were well under way with several artists before the pandemic, which we now have to restart outside Norway. The short-term goal is to get back to where we were right before the pandemic as soon as possible. 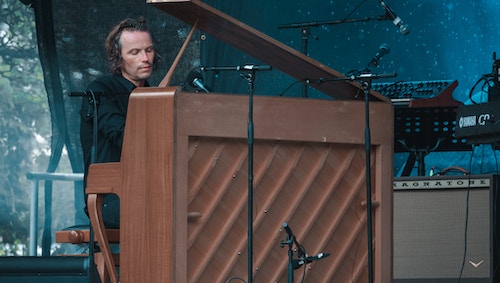 Fay Wildhagen has recently made the soundtrack for the documentary "Aksel" about the skier Aksel Lund Svindal which was released 15th of October in Norway. When the film is released in Germany and Austria, the plan is to work export-oriented towards these markets, Brydøy says.

- We have plans for some showcases throughout 2022. We are looking at the Reeperbahn Festival for next year, for example, but there will not be a tour until 2023. In addition, we will do a little more push on the radio this winter and the general press in these markets.

In addition to Germany and Austria, they also want to focus on China.

- Fay has a grandfather who is Chinese, but who lives in Norway. So the interest in China started with us. Now we have confirmed that her music fits well into the market over there, so we are in the process of cleaning up our channels so that all the linguistic info is in Chinese. In addition, we have started looking at solutions to make livestreams for the Chinese audience, as there will be a 14-day quarantine in China even in the middle of next year, so there is no point in thinking about going there the next couple of months. Thus, this will be a long-term project towards the next record.

Thomas Dybdahl released the album "Fever" on Friday 13 March 2020, the day after Norway closed down, so Brydøy has had to think differently about the album and the promotion around it.

- The world's worst timing we can probably say about that album! The album was called "Fever" and was released at midnight after our prime minister had been on the podium and closed all of Norway. The whole tour was canceled and we had to think completely new. Thomas has been very creative and we have ended up releasing an extended version of the album that we called "Cabin Fever". We did several streaming concerts and were forced to think new around the whole launch.

- Just before the pandemic, we also launched a beer called "Fever" together with Haandbryggeriet. It has sold very well, so there are some industries that have come out of the pandemic better than us, says Brydøy.

It's a great advantage for us to be able to sit in the same room and discuss with A & R's and partners abroad.

Thea and the Wild had several plans and showcases planned when the pandemic came to London, which all had to be canceled. They want to establish a team around her in the UK, but say that it is not as easy when everything has to be done from home.

- I think it has generally been difficult for us to get neither yes nor no from labels and publishers abroad when everyone has been in sitting at home. It seems that they have problems making decisions when they have not been sitting together in the office. Zoom will certainly not be the same now, I think, Brydøy concludes.