Songwiter, artist and topliner, Alex Pavelich, believes in hard work and definitely doesn’t let a pandemic get in the way of productivity. Under the alias Lovespeake, he has been involved in countless hits, ranging from pop to EDM. He recently co-wrote and is a feature on David Guetta’s “Save My Life”, a song created online during pandemic lockdown.

“Can you tell us a little about yourself and how you started your music career?”

During my childhood and adolescence, I grew up both on and behind the stage and in the orchestra pit in Opera Nordfjord at home on Nordfjordeid. I eventually started playing in bands, attending UKM and writing songs, and got into LIPA in Liverpool. There I ended up in a small bubble that was only about playing in as many bands as possible, gigging around, working and learning studio at all hours of the day and “finding yourself” as it is so nicely called. It was a unique chance to meet like-minded people who were also passionate about music and wanted it as a livelihood.

The last year, in 2010, Andrew Murray and I started writing what would be Eye Emma Jedi’s first songs. We moved to London and tried our luck there, but my girlfriend and I found out that we wanted to live in Oslo. Eye Emma Jedi got listed on P3, with six listed singles, and a hundred gigs in the first couple of years. It was a really fun time. We went to Spain for three months to make the debut album, but when we got home we ended up going back to the studio at Hadeland to write even more songs. The brash indie rock was replaced by synth and analog psychedelic retro pop, and we found out that this deserved a new name and a new image, and Lovespeake was created. Things did not go quite as they should, so Andrew and I each went our separate ways; he started Baya and I could go on as Lovespeake, both as an artist and topliner alias.

I joined the songwriting camp By:Songs at Tanken in 2014, and got my first taste of writing for others. It was completely wild to suddenly be able to follow any melodic instinct, to have free rein outside the band bubble, where things should not be too commercial and kept “cred”. It is said that light shone in my eyes as I walked through the hallways!

The last couple of years I have had an A&R / Curator role at the camp and had creative control over the participants, which has been an incredibly fun and educational experience – book people, put songwriters and producers together based on relationships, gut feeling and “on the ground”-experience; how are they actually as people, who do they click with, what are their strengths. Knowing who the people actually are versus looking at a cutlist on wikipedia is so important. Songwriting is chemistry, or like mixing cordial. The ingredients in a session must be mixed correctly. By:Songs has been a big part of my career, and is my highlight every year. The network you get from such a camp is worth its weight in gold.

Songwriting is chemistry, or like mixing cordial. The ingredients in a session must be mixed correctly.

When it comes to my own songwriting, having children was a real kick in the ass. To put the band dream on the shelf for a bit and focus on something that I really thought I could be good at, as long as I worked hard enough. And really hard. I remember being in my paternity leave, delivering a 3-year-old to the nursery, baby Oliver fell asleep in the car, I took the car seat into the bedroom so that I could sit and work in the living room for a couple of hours in the old basement apartment until his nap was done. I probably wrote 200 tunes while I was on leave thanks to a sleepy baby boy … And that was probably how I worked my way up in bigger and bigger rooms – that people noticed my productivity, that I could play a variety of instruments, sing a lot of different styles, and finish things when I said I was going to finish. The songwriting life is about wearing different hats from time to time – being a chameleon. I’m also very happy to have my band and orchestra background. Look at Max Martin and Shellback who have played in metal bands. I think you get a better sense of arrangement and how a song develops and has better dynamics when you have been a band musician.

“You have co-written and are a feature (as Lovespeak) on David Guetta’s “Save My Life” from 2020. This is a song that was created during a pandemic lockdown online. Can you tell us a little about how it came to be?”

First and foremost, my friend and colleague Erik Smaaland was in Denmark on a trip, and was advised to have a session with Mike Hawkins and Toby Green, two Danes who are key figures in Guetta’s inner circle when it comes to both songwriting and production. Especially when it comes to club songs. They produce everything and help shape his sets, etc. They are wildly good. Erik and the rest had some jams, he came home with a track in his backpack and I contributed melodies to it. This was probably right before Corona hit, if I remember correctly, so we contacted Mike + Toby directly online after that.

Mike said he had a club hit that is 99% sure to be the next Future Rave single in collaboration with MORTEN. And that “If I nail it, and sing it really well”, then it is very likely that I could also end up being a feature on the song. Of course, I couldn’t miss that chance! So I sent lots of suggestions, they sent them to David, he loved it, and we went back and forth a lot with whatsapp voice memos, dropbox links. All the tweaks and fixes took place between weeding in the garden, cleaning the garage and cleaning the house before we went to Eid on summer vacation. The last take was made while the kids were sitting in the kitchen actually. In the penultimate version, you could still hear a couple of loud car screams from my youngest at 3 in the background of the vocals, haha! So I had to sing it again when we got home to Drøbak.

“What inspires you when you make music?”

I am inspired by life in general. Whether it is real or fictitious events usually does not matter much. “Do not let reality get in the way of truth”. One should write a song that gives the listener something special, feel a variety of emotions that you have laid the groundwork for. Should they feel hopeful? Happy? Excited about a night on the town? Reflect on something important? The more specific you are about what you actually want to achieve with the song, the better. The lines should be like a conversation, a dialogue. Would I say this to someone? Is this something people say? This varies from genre to genre, but it is a good starting point to have.

Everything you have seen, smelled, touched, heard and felt are the most important spices in your spice rack.

I play a lot of games, love movies and series, and of course you get inspired by that too. That’s nice to have when you are dealing with a pandemic and not necessarily get to experience new things that can get to experience as much new that can serve as a source material for a song.. But we have all lived lives with ups and downs, you have been in love, disappointment, grief, etc. I thought about this the other day, the subconscious has saved all those feelings. All the senses are to be used now. Everything you have seen, smelled, touched, heard and felt are the most important spices in your spice rack. So even though it feels difficult to be inspired during a lockdown, it’s just about going into oneself and what one has experienced for x number of years. I’m also inspired by listening to music, what are people doing right now, can I do something similar, etc. And not least – I get very inspired by working with other people who do not see the challenges with Corona as limitations, but as opportunities.

“Do you have any tips for others in the industry on how to work globally in such a challenging time? What does it take to be seen / heard?”

Strictly speaking, there is no excuse for not learning to track yourself, produce a little mix your own vocals when we’ve had a pandemic. Or that you have decided that you “do not like zoom”. Sorry, then you’ve just been lazy. Now it’s time to use the tools at your disposal and rethink. If you are sitting on a song that is not completely finished, who can you send it to, to maximize the potential? One should not be afraid of losing some share of a song if the share you give away is the factor that actually makes the song placed.

Find out who is good at tracking their own vocals, those who are the best producers in their fields, and reach out. A typical working day for me is that I either have a session during the day, or that I work 8-16 on tracks and send around 3-5 ideas every day to potential sparring partners. Pick up the kids, be with them, put them to bed, and in the evening I have Zoom sessions with people from the US, Canada and the UK. You need some input so you don’t go blind to your own ideas. Together you are stronger.

I get very inspired by working with other people who do not see the challenges with Corona as limitations, but as opportunities.

“What is the best piece of advice you have ever received?”

It’s a couple. The one I mentioned above is quite nice. “Do not let reality / something real stand in the way of truth” Another good tip from Benny Blanco is: finish your bad songs so that nothing bad bleeds from that song to the next that is potentially great. Sometimes it’s better to commit to finishing something completely, than to just forget about it and move on. Songwriting needs closure so you have a completely blank canvas for the next song. A few other things:

“Sometimes things have to be a little tacky!” 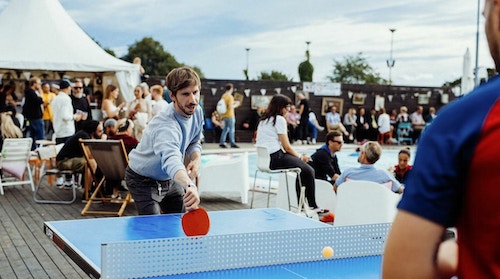 Networking at Øya Festival