In this Morning Coffee session you’ll get to know 𝗩𝗮𝗿𝗴𝗮𝘀 & 𝗟𝗮𝗴𝗼𝗹𝗮 (Salem Al Fakir and Vincent Pontare) - one of the most successful songwriting duos in Sweden, to hear about the stories and occasions that led them towards international success. The talk is led by the legendary music journalist 𝗝𝗮𝗻 𝗚𝗿𝗮𝗱𝘃𝗮𝗹𝗹.

The Award-winning duo 𝗦𝗮𝗹𝗲𝗺 𝗔𝗹 𝗙𝗮𝗸𝗶𝗿 and 𝗩𝗶𝗻𝗰𝗲𝗻𝘁 𝗣𝗼𝗻𝘁𝗮𝗿𝗲 have achieved great success worldwide as songwriters for Avicii, Katy Perry, Madonna, Swedish House Mafia, Sia, Asap Rocky, David Guetta and Ghost among others, and have over 8 billion streams attributed to their music. Their own artist project Vargas & Lagola stems from a combination of classic songwriting and strong choruses, added into the cement mixer with 60's and 70's Americana and hopeful melancholy. Their hit song “Roads” sold 3x platinum and reached #1 on the airplay chart in Sweden.

Vargas & Lagola’s debut album “The Butterfly Effect” was released in January 2020, and the sophomore “Mount Alda” in October the same year.

Swedish “Pop Professor” 𝗝𝗮𝗻 𝗚𝗿𝗮𝗱𝘃𝗮𝗹𝗹 lives and works in Stockholm, and has for the last 40 years been one of the leading music journalists in Sweden. He has won several awards, written books and runs his own podcast, and some of his articles have been translated and published in Norway, Denmark and Finland. Jan took part in the jury for Nordic Music Prize for its first three years, and is also recognized for his world exclusive interviews with ABBA and Max Martin. 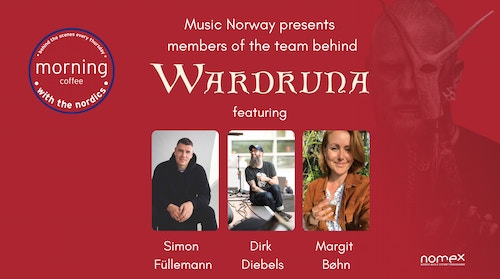 Morning Coffee With the Nordics 2021